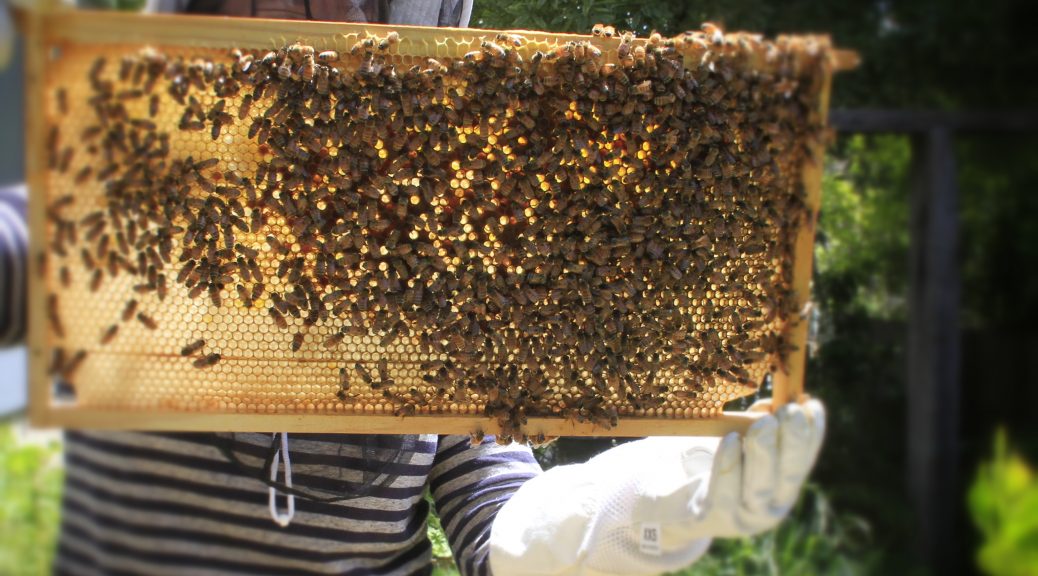 I have finally done my beekeeping course.   About 10 months after I first received my nuc,  I turned up last weekend to Doug Purdie’s (from The Urban Beehive) course.  Joint owners of the business Vicki and Doug keep about 100 hives all over rooftops and urban backyards in Sydney.   The course was a one day everything course.   First half of the day was theory and the afternoon was practical.   I chose this one because I liked his books (Backyard Bees, and his new best seller The Bee Friendly Garden) and like the idea of rooftop beekeeping in inner cities.   But the main reason was he has different types of hives so I could compare FlowHive to standard Langstroth, to Warre, to TopBar hive.      It was a brilliant day – and anyone in Australia or NSW wanting to do a really worthwhile hands on course – I would really recommend.   Doug and Vicki are incredibly personable and helpful and no question is treated as stupid.  Which I know some of mine were.   You have to book months in advance and he may be getting fully booked for this season.    I learned so much more than I had already taught myself, but also was reassured to know much of the direction I have been taking is on the right track.   The best thing for me was giving me a really strong confidence in what to look for when doing my inspections.   It’s only practice that you become comfortable and today I did my first inspection since the course and was a) able to light my smoker so it stayed on for the whole time (small victory!) and b) take my time and really look for signs for young larvae – determining there is a healthy queen as recently as 3 days ago.     The one thing I am slightly concerned about is the amount of bees.  While slowly increasing they are really taking their time.    They aren’t going anywhere near the two outside empty frames (the ones with a wooden strip but no foundation).   I discussed this with Doug and he suggested I immediately replace the two outside frames with ones with foundation.  Because they may be putting all their energy in to keeping the existing frames clean and going, and there may not be enough of them to start building their own wax foundation on the empty frames.   (at least I think that’s what he said).

Which led me to my next self taught adventure.   That of wiring up a frame and embedding the wax foundation.

The wiring up was simple enough – and there are so many videos online to help.  One guy from Australia I quite like is Mahako Bees and I used his video on wiring up and embedding as my main guide.    After wiring up the frame you then essentially put a wax foundation sheet on the wire (making sure it’s slots into a slot on the top of the frame) and zap the wire with heat so it melts into the wax.  Using a 12v battery I purchased at my local hardware for about $50, I simply plugged it in – and put each alligator clip on the wire in two different parts.  I slowly pressed the sheet onto the wire (with a backing board underneath so it sits flat and neatly – aside – this backing board came with a hive and wax I bought from a Bathurst beekeeping supply place).   The melting only takes about 5 -10 seconds.   I actually had two different types of wax foundation sheets and tried them both and one sheet melted a lot quicker than the other – so quick that the wire melted straight through and cut through the wax.   You don’t want that! So there is a bit of experimentation to be done.   See the gallery here of my first frame wire and embedding.

The inspection (number 8 for those counting), went well.    I replaced the outside frames.   I looked for baby larvae which indicates the queen as I mentioned,  and I looked for different types of cells and looked for disease.  (larvae, capped, pollen, empty, honey)   The things I noticed that were different from the ones we inspected on the course is there are a lot less bees.  So my hive is no where near capacity.   I also saw no obvious honey cells.  I’m certain there must be some, so will look closer next inspection in a couple of weeks time.   The frames where incredibly light – even if they were covered in bees, so I’m not sure if this a problem or not.    I did find the Queen again which you can see in the photo below.     I’m keen to see if the outside frames will encourage them to start using them now they have foundation.   My comparison photos show that the colony is growing, if slowly.   It’s a little frustrating seeing all the first year Flowhive Australian’s starting to not only put their supers on – but start harvesting honey – and my brood box is not even at capacity. I do live in a cooler climate than most of the beekeepers I follow so I’m not panicking or worried too much.   I had planned on putting the Flowhive on top today – but just felt the hive wasn’t strong enough yet.   I’m just taking an educated guess at that – and really want to conduct patience.   Check out today’s photos.