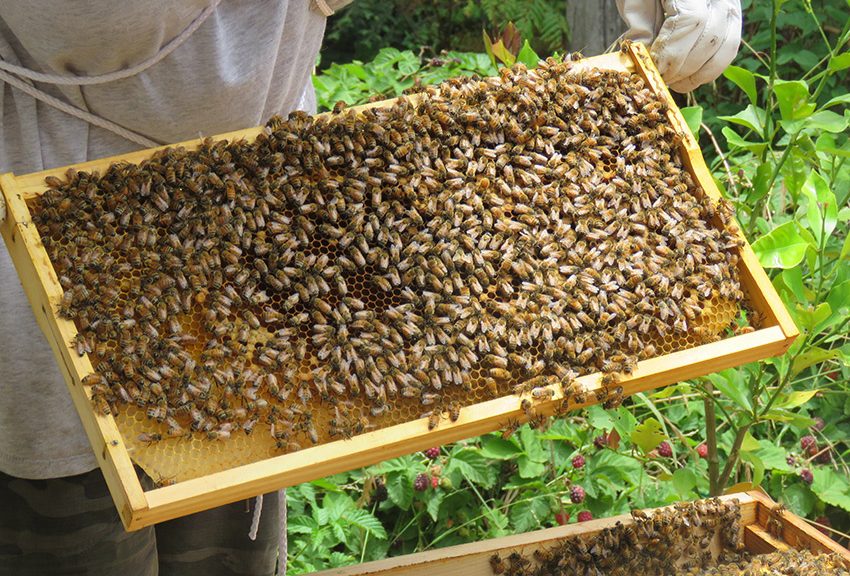 Last week I did an inspection.    After putting the super on – I wanted to see if everything was ok.

I’ve read that it’s not uncommon that a new beekeeper will not get honey in their first season.    So patience is essential.  Given it was January 2016 (southern hemisphere) when I received  my nuc – I’m still not sure if I have done one complete season or just a kind of half season. I’m now into the second summer in theory.   Anyway the population was really growing and the frames were about 80%.  So I put the super on.    The jury is still out on if it is/was too early.  No honey yet on brood/super.   The good news is that when i did my inspection the population growth was immediately evident.  They have exploded in numbers as you can see from my comparison picture below from early nuc days to now.   This inspection I saw babies, and lots and lots of bees.      However, I also saw a wax moth larvae fall out of the hive. (picture below)   I also saw one  a few days prior as I was exterminating an ant situation from under the roof (using my old cinnamon trick – which did the trick).        I didn’t obviously see any others when doing the inspection – so it’s not an infestation – but I am immediately worried.     Doing a bit of immediate research on the internet kept throwing up the same type of discussion.    A healthy hive would not normally tolerate  the Wax moth laying eggs and the bees will naturally get rid of intruder eggs or larvae.   However a weak hive could be taken over very quickly and you lose the lot.    As I am more prone to concern than complacency when it comes to my bees,  I am worried I have the latter.      Wax moths are called that because they are usually hanging out and attracted to stored wax foundation.     If you remember I put in two new wax foundations a month or so ago to replace the foundationless frames at each end of the 8 frame hive.  So I am assuming they could have come in on that.   The alternative is that moths have actually come through a gap in the hive (bad roof mountings with gaps  etc) and laid .  I do have an ‘opening’ of sorts at the top part of the super – there is a little cover strip that goes across the caps of the flow super where you eventually put the big metal key in to turn the hive tap on so to speak.  I lost that cover a long time ago and am having the lovely chaps at FlowHive send me a new replacement.   But I did wonder if it allows for anything to get in the hive like moths.  There doesn’t look like an opening – but there could be.    I am going to open up the hive again this weekend to check on the bees.   So stay tuned for an update.