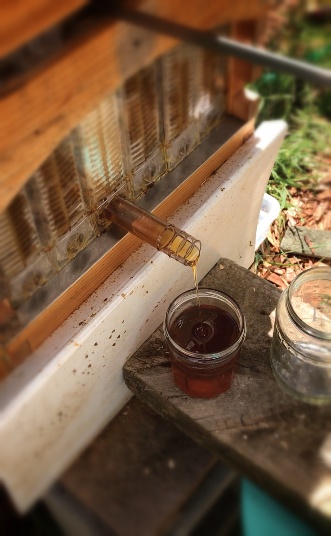 I work from home on Friday’s.   So this Friday I decided after much contemplation, research, panic, and inspection I decided to harvest my first honey from the Flow Hive and my bees.    Essentially I am robbing the bees of their food.   🙁

There is a 3 day heat wave here, – getting up into late 30’s near 40.   Insanely hot.    My first concern is for my bees so I decided to trial a wet towel draped over the hive and dunked into bucket of water to wick.   I’d read about it here and there so decided to give it a try and set it up first thing this morning.   For most of the day the bees seemed fine – but only in the last hour have they really come out to cool down the hive.  Called “bearding” lots of the bees come outside the hive to allow it to cool down.  I think that’s the basis of it.  They will eventually all return to the hive – but with three days of this = it’s going to hard for them to keep it cool.

Before my harvest today  I wanted to do an inspection of the flow frame I was intending to tap.   Check it was fully capped. (or nearly 80-90% capped).  I fully suited up for the inspection in the Flow Hive suit they sent me with the hive.  First time I have worn the full kit – bit tight!.  I was still stung on the upper arm through the material!   I suited up because of the heat, and there are a lot of bees now and I am becoming a bit more responsible.   To my surprise – The frame, while full from the observation window – when I pulled out the frame to properly look at it all  – the centre part was not capped.  I am not sure if it’s because it isn’t fully capped or that the bees are feeding back on the honey.  I think the first – but not sure.  The end third was totally capped as was the last.  So I decided just to harvest 1/5th of the frame  as I was totally committed to doing it today.     The video below pretty much shows what happened.   Honey flowed (in a good way!) .     Very exciting.     I only filled one jar and popped the cap back on.  Theory being that the small remainder of honey left in the bottom channel  after locking back up the cells, will be cleaned up by bees.   However in my case I now have an ant invasion everywhere.

One thing that hasn’t been really evident in the videos is how honey can drip everywhere !   And the smallest drip  invites ANTS.  From everywhere.   The cap that you put back into the flow hive where the tube goes – still has excess honey around it – and of course is attracting ants!   So I have sprinkled cinnamon around everywhere and tried to clean up properly.   Major lesson #64 of beekeeping.   I am going to build ant-traps for the hive over the weekend.  I also saw a SBH “small hive beetle” – which while not a major pest – can be dangerous – and they must be killed when seen as they feed on the honey (or the larvae does, and burrows through  wax etc).   However the one I saw ran away.

It just flowed incredibly quickly.   It was warm and very dark golden.  It perhaps had a slight taste of fennel – not sure but I think it may have.  There is a video below the pictures you can watch what happened.

[ just in case there are questions about the core flute being held against the flow hive in an upright position. – This was because my core flute didn’t slide into the bottom correctly, one thing led to another and bees started entering from the bottom due to the Screened bottom board being a little distorted and bees could get out – SO.  my temp solution at present is to have shoved the core flute against the opening until I can work out what to do. – again – no idea!  but working through problems as I go.  Am currently working on a solution of correct size core flute cut from old realestate signs… stay tuned ]