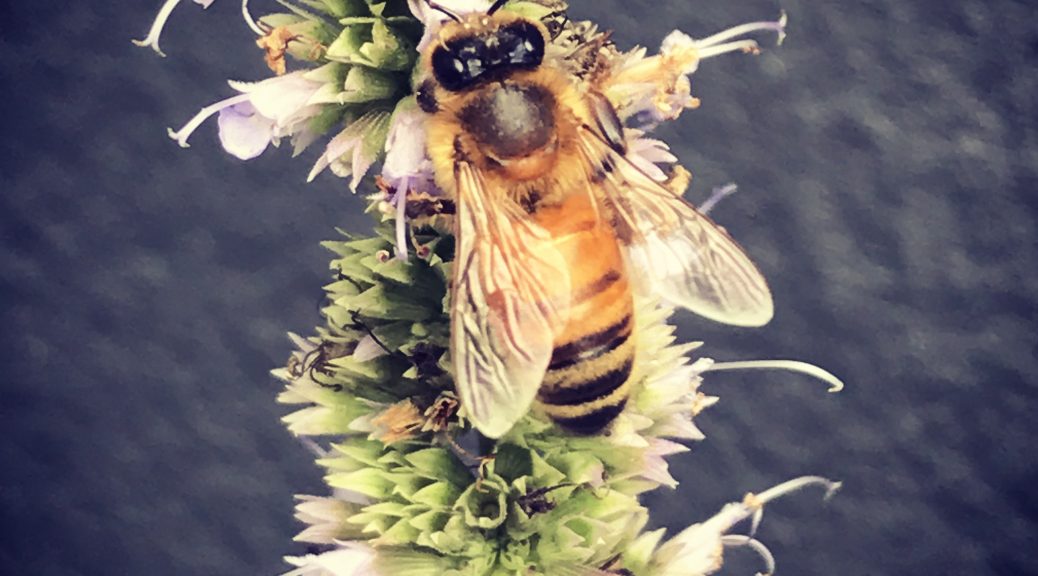 On Saturday I planned my first big inspection since my Flow frames have been at bee capacity.   So many things I wanted to check, but the main over riding thing was – do I have too many bees?   I have wondered for a few weeks now if I am at capacity in my hive, and feel like the proverbial rabbit in headlights with not knowing what to do.  What I have done so far is actually nothing.     It’s been an eventful fortnight.  We had a massive heatwave,  followed by some severe storms.     Perhaps I should have taken those extreme weather conditions as a sign of probably not a great time to be disrupting the bees.   My instinct was it may not be the perfect time.  However I was worried about (in no particular order) – 1) Small hive beetle infestation (since my core flute is not working properly to even check for any sign) and I saw one scurrying away about a week ago.  2) too many bees – thinking they may be about to swarm – which environmentally is something to be prevented in NSW – their capacity to take over hollows in the ever decreasing availability for nesting wildlife .  It’s not the season for swarming (Spring is the main time), so unlikely but still…. 3) Worried that the bees need more room – wanted to check the brood box to see if it was at capacity and did  I need to add a new box (brood or super).

I also wanted to set up a platform for two pieces of wood (like rail way tracks) for another hive to sit on as well. We just slid the two lengths under the hive during the inspection.  (which we did towards the end).

After some deliberation about the weather I did the inspection when I thought the day was remaining fine.   No sign of storms or rain.    (first mistake).     It thundered in the middle of the inspection, didn’t rain – but still the atmosphere would have been changing which bees would sense.    I also did the inspection at 3pm,  probably a bit late – best advice is about noon to 2 when bees are out foraging.       (second mistake)

The first part of the inspection when well.   3 out of the six flow frames were capped – the rest about 60%.   I removed about 4 frames and put in a spare box – in order to be able to lift the super off (they are HEAVY).    Once that was done, the bees were getting a bit agitated.   I think I over did it with the smoke (third mistake).     By this time about 10 minutes had passed.   I checked about 4 of the 8 brood frames.   I saw babies, (which means the queen is around.  I couldn’t find her though.   There were  so many bees = over flowing with bees, it was a little (tiny bit) scary.  You have to keep calm, but I was very aware I still had to put the whole thing back together.   In the brood frames there was honey, brood, pollen.    I decided not to keep checking the rest or find the queen as the bees were getting fierce.  I had been stung 3 times through the bee suite already.

So I put the brood frames back, and then after a bit of coffuffle  put the flow super back on as well.   The BIG problem here was I couldn’t for the life of me get the last 6th frame into the Flow super.   It just wouldn’t fit.   I was pushing the flow frames as tight as they would go but the sixth one just wouldn’t fall into place.  I was extremely conscious that I didn’t want to squash bees.   So the scene is this:  Thousands of angry bees buzzing around me, stinging me, the flow frame wouldn’t fit and I didn’t know what to do.     So many things going through my mind – the main one being was that I couldn’t leave – I had to stay to get this frame in.    Eventually it did – with pushing (and squished bees I am sure) I threw the lid and covers back on as quickly as I could and got out of there.   We couldn’t go back  into the house the normal way – because the bees were chasing us through the door.  So we took a long way around – so they eventually let us go.

The bees were bearding all over the box for about 2 hours after.   I eventually was able to go and check the observation window about 4 hours later and the poor things had gorged on honey – and it looked nearly empty – disappointing after they had spent the week filling up those end cells that I could see.    Smoke causes them to feed on honey (something about filling up in case of fire I think).   (my final mistake)  I squished bees when I put the flow frames in.  I squished bees when putting the super onto the brood – this is because there are SO many bees – I just couldn’t get them away.   I squished bees when I was putting the roof on.   Squished bees means a couple of things – bees get angry when they smell dead bees, and the small hive beetle finds new places to lay eggs.   Most importantly just heartbreaking.  I felt completely horrible afterwards.

I have decided to put an “ideal” size box on in between the super and brood box.  This will give them more room.   I have ordered it online and it should arrive within the week.  The ideal size box is the small one that people often us to harvest honeycomb from.  About half the size of a normal box.

I didn’t see any SHB – I think that the colony is so strong they probably deal with them.

I think I saw an emergency queen cell – it certainly looked like a drooping cell with a hole at the bottom.     Not sure what that means exactly – usually they are preparing for the queen to die I think (may be wrong here) .  Observation only – I haven’t done anything about it.

My various means of asking advice online have told me it’s probably too late to split the hive in two.   So I won’t do that.    I will just sit tight – put the extra box on next week and hope for the best!

I came out of the inspection with 5 stings.  yay.  (4 through my suit/gloves and 1 on flesh when I went to check on them).

The photo below is the only one I took.  It’s after the inspection – showing how little honey there is in the end of the frames.  (this had slowly been filled up since last week’s gorging).   (see last post).

The last photo is of one of the bees on a new plant in my little bee garden on the side deck near the hive.   The plant I received for Valentines Day. I love beekeeping 😉