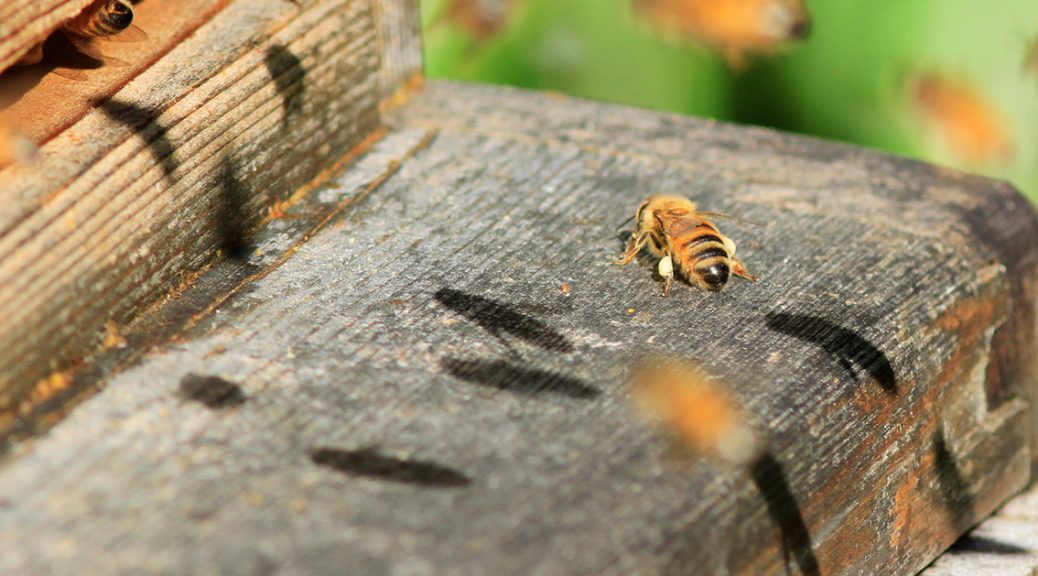 It’s been the wettest March on record, so much rain, that the people of NSW eastern seaboard are slowly withering in to a wet clump of humanity.    I’ve check on the bees every day and they were barely leaving the hive.  The flow box was so wet the wood was swelling and it was almost impossible to remove the observation door.    But when the sun came up this morning, there was a universal hallelujah across Katoomba, and the bees couldn’t have begun foraging quick enough.    The video below shows all the activity.   The pollen they were bringing in was a really light colour, plus also some of the old dark yellow colour.  There is something in flower around us that must be very pale.   I did notice our ivy (which is an out of control weed) flowering and bees were all over it – that could have been it.  But also I think there are probably a bunch of eucalyptus in flower around.   The bees were almost smiling they were so happy to see the sun.

I had planned to do an inspection when there was  clear weather and decided to do it this afternoon.   I enlisted some help to remove the Flow Super off as I suspected it was nearly full and therefore incredibly heavy.   We managed (just!) to lift it off and then I began the brood inspection.  Immediately we identified there were still a zillion bees – so a strong colony.  I pulled out the first frame and we immediately identified the queen on the inside edge.  Well actually not 100% – probably 80% – as I couldn’t quite catch her to see her long enough and my photos were a bit blurry.   But I’m pretty sure it was her.  We also saw small bee lavae in some cells in the second frame and by the third frame lots of brood, pollen and a bit of honey.  I decided to stop there as they were really active and wanted to close up quite quickly after last inspection has made me a bit shy.

After we put the super back on, I also pulled out one frame of the super to see how it was going – as it’s jam packed full of bees as well.   The frame I pulled out was about 80% full and the one next to it 90% full.    I suspected every frame is getting close to full – so I also harvested 1/3 of 1 frame as well.    Wanting to give them more room, but also not take too much as we get close to winter.   It’s a balancing act – and one I am no where near confident of being my first proper winter approaching.

One other thing I saw was a big fat wormlike lavae – like wax moth or hive beetle.  But it was the only one I saw.  I can’t imagine anything surviving that shouldn’t in the hive there are so many bees.

Here are some pics (and the video).