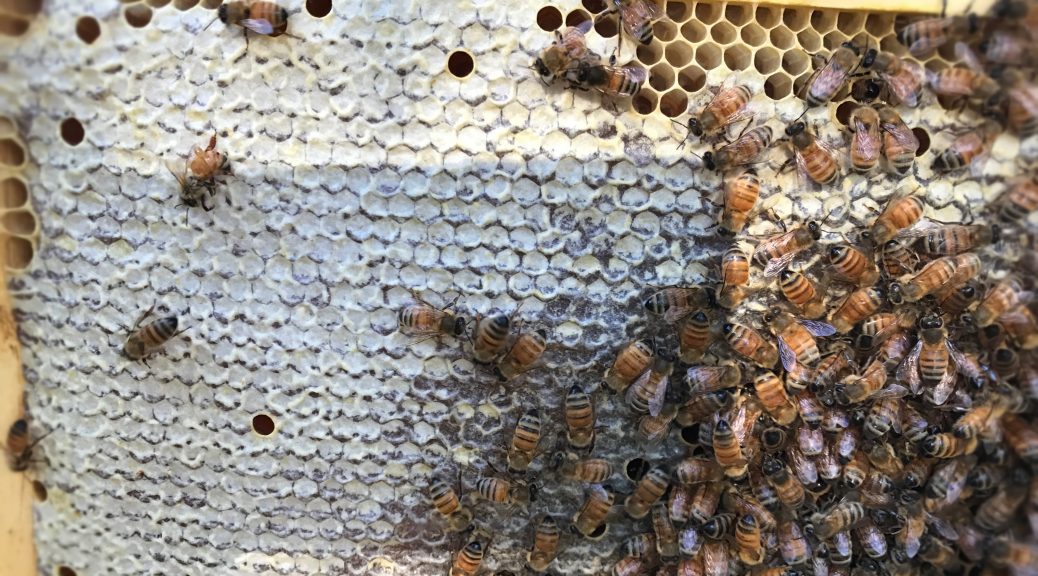 Yesterday I did the full brood inspection as required by NSW regulation for beekeepers in Autumn.   There is a great pamphlet here from the NSW Govt on how to over-winter  bees.  Over-Wintering bees is the name given to preparing your hive for winter.   The first step is a full brood inspection of every frame to check for disease, whether there is healthy colony,  ensure there is a queen and check the bees have enough honey (food) stores for the winter months to get through to spring.   The queen slows down her laying and the large colony of bees will gradually reduce.   Given this was my first full colony brood inspection I was excited.  Last year I was still on my nucleus colony and only one box still.   I was as concerned then, as I am now, about whether I will ensure my bees survive – but given this is year 2, I have so many more bees to look after and new questions and concerns.   The bees will create a cluster around the queen during winter to keep the warmth around her consistent.     I need to make sure there is enough honey in the brood box (the bottom box) as well as the super, to keep everyone happy.   Some people remove the queen excluder during winter to make sure the queen isn’t abandoned if the bees get really hungry and move up to the super during winter leaving her exposed.   Other’s don’t.   I am choosing the latter.   I just don’t have enough trust in my understanding yet of the colony that I would be worried she’d start laying in the flow frames.   Apparently she rarely moves upwards into the super, but sometimes she does.  I just don’t have an instinct about that yet.

Anyway onto my inspection.  I was flying solo.   I get quite stressed with nerves when doing my inspection and really need to learn calmness.  The key to bee inspections is being still, slow, steady, quiet.    I thought I may be more calm if I just had me to worry about. The pro of all this –  I could take my time,  not worry my family getting stung and I wouldn’t have an audience to be performing in front of.   The con of this is I don’t have my ever faithful note taker 15 year old, my strapping young 17 year old who can lift the super, my photographer partner and several set’s of eyes looking out for the queen.   After lifting the flow super off (in the new way as described by the Flowhive guys in one of their videos – standing on the side and lifting sideways rather than from the back),  I was able to then do my frame by frame check in the brood box.  Turns out I should have worn my glasses on my solo outing, because I just can’t hold the frames far enough away to focus to find the queen, let alone any eggs (which are the size of a grain of rice in the bottom of a cell.)  It’s important to find either the Queen or the egg as the egg signifies she’s been laying as recently as 3 days.  So I found neither.   Good news is the colony was massive.  Packed to the rafters as they say.     I did find larvae, so the queen has been laying fairly recently.   I saw no obvious signs of disease, but I didn’t do the matchstick AFB check, as I completely forgot.  (if you don’t know what this is – it’s too check for American Foulbrood and you can read about it here)   This is why I am going to start a checklist moving forward before opening the hive!   I also saw no small hive beetle – so the trap at the bottom must be working.  I saw no wax moth larvae either, which I have seen in the past.   I checked every frame, and for the sake of my own record I am going to list what I saw here:

My main concern is that while every frame was packed with bees – there didn’t seem to be much capped brood at all or much “bee bread” pollen stores. I am guessing the queen has slowed down? (or she’s dead and I don’t know).   I’m not sure if this is normal or not now we are well into Autumn.    As with all my bee adventures – time will tell.   I was very pleased to see 2 full frames of honey in the brood box.  That honey, plus all the honey in the super I believe will be enough for the colony during winter.   After the full check –  I then put the super back on.  Sorry to the few bees that I squished as I put the heavy box down on the brood box.    I just can’t see how you do it without squishing.   I checked most of the frames in the super.   I am finding the Flow Frames quite hard  to remove once they’ve been glued up by the bees with their propolis.   It’s certainly nowhere near as elegant as you see in videos.   The frames have been in there now for six months and they are completely stuck together well by the bees.  It takes a lot of jiggling with and using the hive knife to separate them enough to pull one out.   The other thing I am observing is if you do take the flow frames out, putting them back is as difficult and it’s nearly impossible to get that last one perfectly even across the observation window.      The flow frame had lots and lots of honey.  2 frames where 100% capped, with 3 more nearly 80% capped.  1 was completely empty (the one at the observation window which I had previously harvested honey from).  That one hasn’t been refilled with honey yet.

So my hive is all put back together.  I harvested about 2/3 a frame of honey (about 2.5kgs)  from the flow and will not touch it again until next Spring.

The final thing I need to do is close up the entrance at the front to allow only a few cm’s gap for the bees.  So they can better guard against robbers during winter and reduce cold air getting in.   I may pop some insulation in the roof too in a few weeks.

3 thoughts on “First Solo Flight (and over-wintering my bees)”