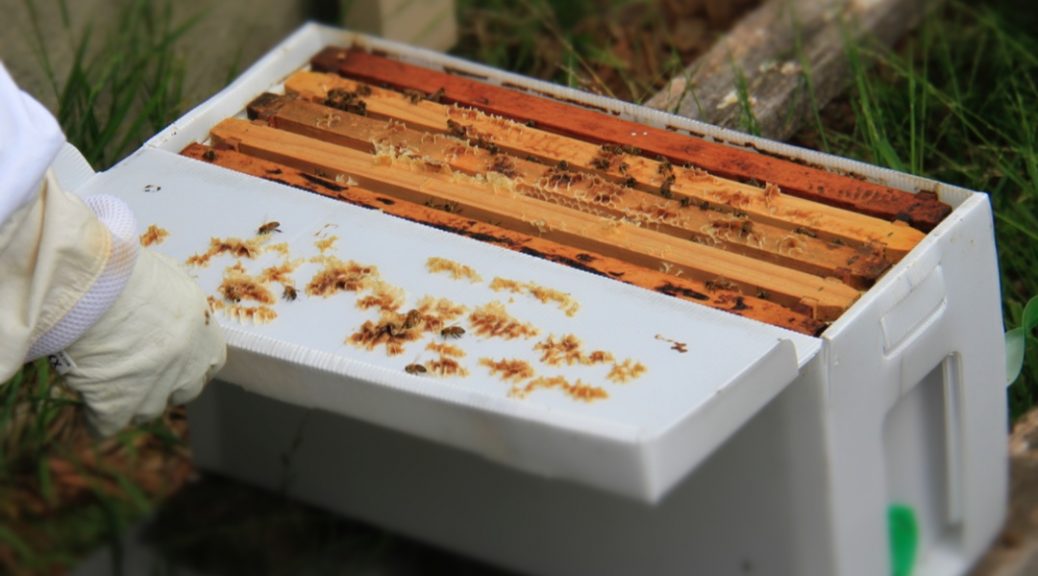 Finally I have a new blog post.   Several reasons lay with my quietness over winter.   It was winter! and things were quiet.  The blog admin site when down and I couldn’t update for a while, and finally a bit of laziness set in!

So my update – The bees exploded late August into September and I can tell over the last three weeks how incredibly packed the two hive boxes are of bees.  I didn’t feed them at all, and the honey I left them over winter in my flow hive seemed to be fine.   My first Spring inspection after Winter went really calmly and while I didn’t find the Queen – how on earth does anyone find a queen amongst 60,000 bees!  Everything thing seemed in order. Brood, uncapped and capped, honey.  Some pics are above.  No obvious disease, and no hive beetles.    I can see the bees through the observation window busily going about their business in the super.  Honey is starting to appear in the end cells.

Way more importantly –  I have picked up my second package of bees to start my second hive.  – Called a Nuc (short for Nucleus) – They are usually supplied in a small core-flut box,  usually five frames.  There are a few thousand bees within.   The one I ordered contains “two frames of brood, one frame of honey, and two partially drawn frames of brood/honey”.  Or so the paper work said.   It wasn’t quite that (there didn’t appear to be one frame of honey, but one empty frame of honey) – but I figured they may have gorged on a lot of it by the time I fully opened two days later, or perhaps things just don’t go to plan.  I didn’t mind – as all seemed ok when I did my transfer to the hive.    I ordered them in Autumn, and they were made available late October.  I  picked them up from the bee supplier (The Urban Beekeeper in Sydney – great guys) one dark drizzly night, in a dark alley in a truck depot of all things.  I am not sure but I think they have an apiary there.  It felt more like a drug deal.   You need to do it at night so all the bees have returned home for the day and the opening slot where they fly in and out of is closed.  Not many words were exchanged and it was really quick and over and done with in about 2 minutes, and off I drove, with the small Nuc strapped into the back seat of my car, ready for the 2 hour drive home, back up to our 1000 metre above sea level mountain top village of Katoomba.   The small green disc at the front was in the closed position (for obvious reasons) until I got home that evening when I opened it immediately.    You put the Nuc in the exact position you intend your hive to go.  The bees then orientate to it.   Then when you transfer the frames into their final home – you move that hive into the same position and they just return to that.     Which is what I did two days later after the rain had stopped.   It was so exciting and I can’t believe had few bees there were, – i had forgotten how small a Nuc is compared to a full hive.  They were very calm and it was really easy.  This time I numbered my frames so I won’t get confused.    You put the frames in the same order they are in the box, and put them in the middle with the final 3 new empty frames (either with or without foundation) at the edges to fill out the 8 frame Langstroth brood box.

While I did that – I also popped an ideal sized super under my flow hive of Hive #1.  It’s the pastel green one in my photos.  Ideal’s are good for honeycomb production.   Trying to get the flow hive off the brood box was so difficult.  The super was heavy and stuck well and truely to the brood box.   The plastic queen excluder that comes with the Flow Hive , seems to be a bit brittle and I will be swapping it out for a metal one soon.  There were so many bees, I think a killed a few trying to put everything back.   It breaks my heart everytime.   I try to smoke them and gently brush them away.  I try and gently lay the boxes down in the swivel method – but I am pretty sure each time I squish some.   It’s the only thing I don’t like about beekeeping.   So the bees in this hive are so packed and they haven’t swarmed so I thought I would just give them some more room.   The ideal has 8 foundationless frames, with a strip of foundation at the top to assist with them starting to build their comb.   I am hoping I will get honeycomb to give as gifts in this.   Time will tell as always – but I am very excited.