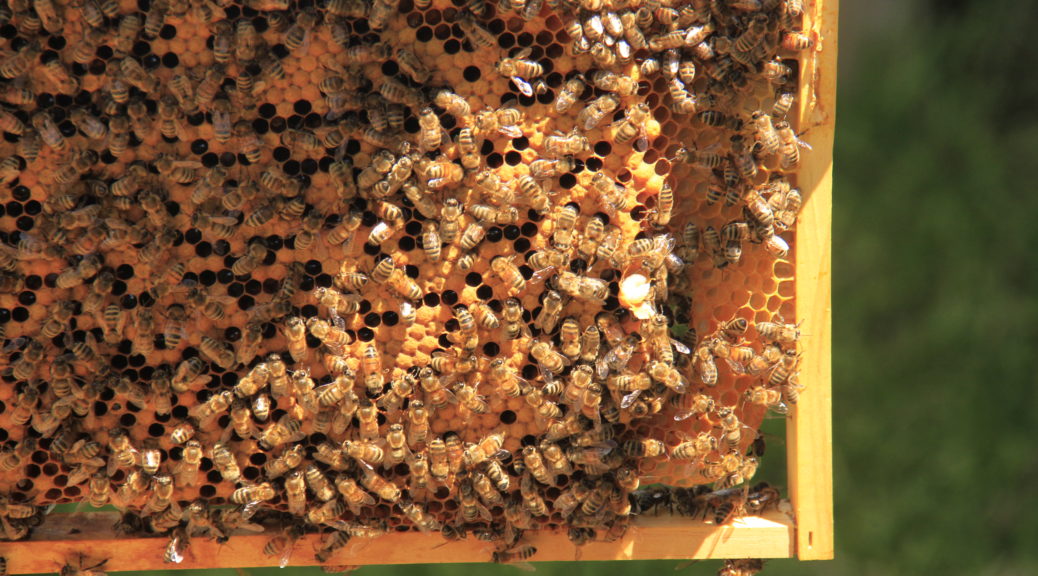 After having the two new hives now for just over four weeks, I did my first full inspection on both. I did a small quick one about 1 week after I picked them up just to check on state of hives and put them into their new homes, but this one I wanted to check health and check for queen (or babies) specifically.

First up Marie -Laure. This one has a flow super on it and was a full size 8 frame Langstroth brood box only hive when purchased. It’s doing OK. Plenty of capped brood, honey in the corners of at least 3 frames. I also observed the active queen. However I have been taking a look at the tray, that comes with the Flow Hive 2, every couple of days. (designed actually to look for Varroa mite in the US) . Because it’s white and in segments it’s super useful to look at the amount of other pests. There has been continuous chalk brood, and today about 4 or 5 hive beetles. There were also some hive beetles on the frames. Although, there is plenty of ongoing chalk brood in the tray – I couldn’t see any in the frames.

There was also what appeared to be an empty ‘swarm cell’, and another near by teacup cell. (not yet fully formed queen cell that is still open) The swarm cell is identified when hanging down from the edge of the frame and usually indicates the hive is pretty healthy and they can look to raise another queen to take half the colony elsewhere. Not sure if this happened previously, but the box isn’t packed with bees so don’t think they are about to swarm.

There was a very small amount of cross comb i needed to break to take out one of the frames.

Jutta was the 5 frame nuc that I put into an 8 frame brood box. It appears to have grown, and looks to be healthy. My only small concern/observation is the number of superscedure queen cells I saw – perhaps 4 or 5. One had been split open and the larve was just sitting there. The supersedure queen cell is formed in the middle of a frame in an attempt to hide it from the other queen, so she doesn’t realise she’s about to be dethroned by a new queen the colony is raising. I didn’t find the queen in Jutta, but did see babies – so she’s (old or new?) has been there recently.