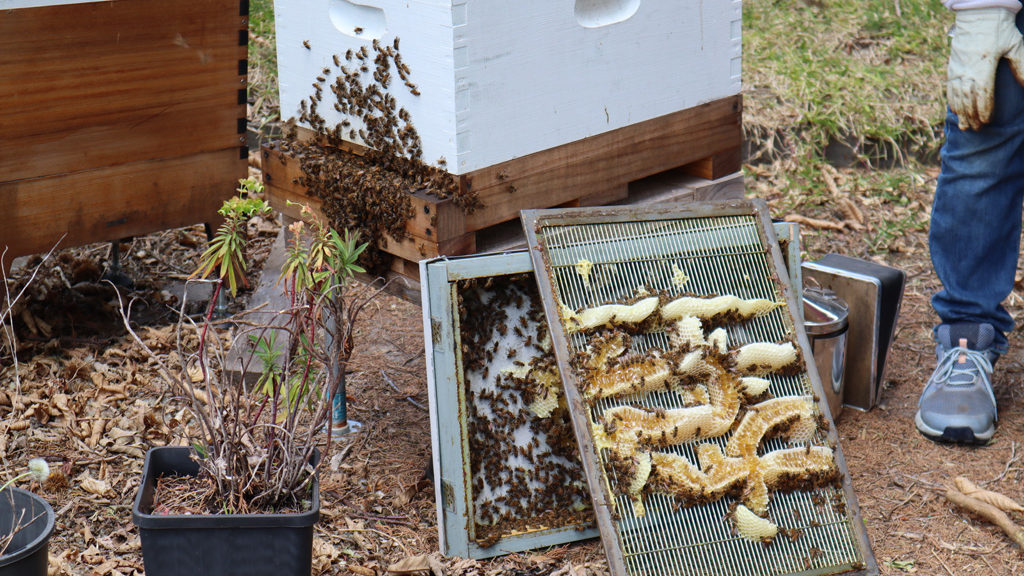 Ok, first up – If you get my subheading reference above – I applaud you.

Next. Burr Comb. I have done my latest inspection (Spring still in Australia). And what did I find, but a lid full of burr comb inside my hive, Jutta. That’s the hive with the gorgous black Italian bees. (at least I think that’s what they are. They are a lot darker than the ones in Marie-Laure. )

The Burr comb was standing strong. I love bees.

In my last full inspection in September, Jutta was a lot weaker than Marie-Laure, and while I put a super on M-L, I left Jutta as a single brood box, but put a queen excluder on so I didn’t have to think about it next inspection. Mistake number #1. I should also have put a hive mat or something over that – I think it may have prevented so much burr comb.

This time around Jutta was busting at the seams, (and bearding). This is what I did: I took the Queen Excluder and the lid off. I replaced with a clean QE. I put on a Flow Super (and put it on back the front in my franticness of burr comb – so will swap that around in a week!!!!!). And a new lid. I put the QE and the LID by the hive – as there were a tonne of bees around them. I shook some off but there were still heaps. I did a check for the Queen under the old excluder before replacing.

Then ran in and quickly brushed up on google about how do handle Burr comb in lid and one of the articles said – “what ever you do don’t leave the lid out near the hive” – ooops. Robbers etc. So i ran back to Jutta and within the 10 minutes I’d been gone, most of the bees had left anyway. So I moved the lid and QE well away from hive and cut it all off and put in a plastic container.

Later in the afternoon I mushed it all up with our potato masher and put it in a cheesecloth, in a seive, over a saucepan and left it for 24 hours to drain. You can see how much honey I got out of it in picture.

We will eat that quite quickly because as it wasn’t capped it wouldn’t last long. (at least that’s my understanding!)

Marie-Laure was a different problem. I had put a super on her last inspection as there was burr comb in her lid! Which I’d left and you can see me removing that in picture below. But because I’d seen the queen in the lid – I couldn’t put a QE on. My Blue Mountains Beekeepers friendlies advised me to just have 2 brood boxes, and then put a QE next inspection plus the super.

However when I opened the box yesterday – most of the bees where in the bottom brood box – and there was absolutely no laying in top. So I felt comfortable that the Queen had moved back down. So I put on a QE between the two boxes.

Then we have Mistake #2. I had put the foundation on the wired frames myself last time, using the old 12v battery method wired up to the wire briefly as I had done in past. But I don’t think I did a very good job. (OR the hive is on a slant.) Some of the frames have foundation, and some don’t. So the girls carefully joined the bottom of foundation on frame 5 to the bottom of foundationless frame 4. If you look closely in the two photos below I am holding up two frames, and then having to separate them. No idea what I’m doing – but hope it works. I pushed foundation back into it’s rightful place, flipped frame around and put it back in.

Because of these dramatics with both hives – I didn’t actually get into the bottom of the hives to inspect the brood boxes. What I can see is there were no mites at all (and had been in past). No European Wasps hanging around (and had been in the past) – and lots LOTS more bees, and lots of honey. So am trusting at present that the hives are healthy – if a bit wonky.